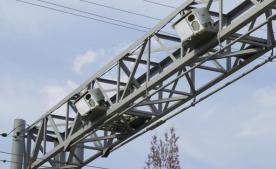 Moscow region authorities are going to spend more than 730 million rubles on maintenance of video traffic violation registration complexes in the next three years. "Stroy Invest Project" company has won the 3-year span contract (years 2014-2016), the company is known to be a developer of “Strelka-ST” traffic surveillance complexes, which constitute the majority of suburban speed detection devices.

The current total number of installed “Strelkas” in Moscow suburban area is 149. Initial maximum contract price was 743 million rubles. Three companies filed their candidacies for participation in the auction. One of the applications was rejected due to the fact that the equipment offered by one of the candidates was not suitable for repairs of “Strelka” complexes and for quick replacement of their components.

After the "accidental" candidate was suspended, two companies continued their competition for the contract. It is noteworthy that one of the companies offered a price coinciding with the initial number penny to penny. In the end, "Stroy Invest Project" won the auction by reducing the cost of services by more than 12 million rubles.