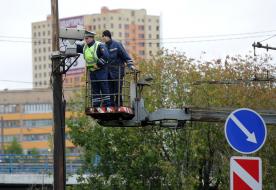 Traffic management center (TMC) in Moscow plans to purchase 400 photo and video traffic violation registration complexes until the end of the year, as Alexander Evsin, head of the TMC situation center, reported in an interview to M24.ru.

According to him, today in Moscow there are 2.1 thousand controlled traffic lights, 11 thousand road sensors, 2.5 thousand traffic cameras and 800 photo and video violation registration complexes.

As TMC spokesperson Anastasia Pisar told RUBEZH, the total number of traffic violation registration complexes, which presumes the creation of intelligent transport systems (ITS) in the capital, is 1,200. Thus, the number of already existing equipment is planned to be increased by half.

The subject of the talk is likely the "Strelka-ST" complex. According to Anastasia Pisar, the city will announce the purchase and a company offering the most viable option will win, as is required by law. However, “Strelka” complexes were serving Moscow for several years already. In 2012 the number of complexes was 263, and the devices brought almost 3.5 billion rubles in the form of fines to the budget. It is possible that the hardware specifications in the technical documentation will be optimized for use with the same complexes. The cost of one "Strelka" is more than 2 million rubles, so the amount of the money spent is going to be at least one billion. In total, Moscow plans to spend about 25 billion rubles on the creation of ITS.

In his interview, Alexander Evsin also said that all the major tram routes will be given priority at traffic lights by the end of 2014, the main crossroads of the metropolis will be equipped with electronic boards and the road video surveillance system will be updated with analytics module.

Sensors that organize a "green wave" for trams are already there, but are not yet in active use. TMC wants to link each on-demand "green" phase with the rest of the traffic lights in the city to avoid interfering with road-users.

Today, electronic boards show only appeals to civility on the roads and observance of traffic rules. But soon they will warn drivers about traffic congestion, display recommended speed, information from weather stations, motorcycle season opening announcements, reminders to change tires and other information. The boards will also inform public transport passengers on major events that may affect the transport situation.

According to Evsin, TMC situation center will be fully operational by the end of the year. On average, such centers help improve the traffic situation by 15-25%, but in Moscow, this figure may be higher.

To get more information on the work of Moscow TMC read the RUBEZH issue dedicated to transport security. In the next issue, you can read about the use of traffic violation registration complexes in the Moscow region and about the struggle between different companies for this market.