Face Recognition System To Be Installed In Luzhniki Stadium

Face Recognition System To Be Installed In Luzhniki Stadium 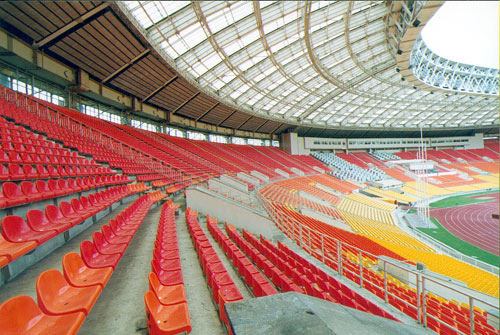 Right now, extensive reconstruction is being conducted on the premises of "Luzhniki" stadium. After its completion, new video surveillance system with face recognition functions will be installed at the entrance of the stadium. According to the information provided to M24.ru by deputy mayor of Moscow on urban policy and construction Marat Khusnullin, the innovation will be used to restrict entrance to fans “blacklisted” by the Ministry of Internal Affairs for disruptive behavior.

According to deputy mayor, the system will identify hooligans even during the purchase of tickets, since some tickets will require registration – they will be issued only upon presentation of an identification document. The system that will track the presence of unwanted guests will analyze three levels of data – data from ticket booths, data from law enforcement agencies "blacklists", and data from video cameras installed in the stadium.

Such serious measures are taken in view of the fact that Luzhniki stadium is stated as the main platform for World Cup 2018 - the stadium will host the finals and semifinals of the event. Ambitious reconstruction project of the first floor of the stadium has begun in October 2014, the work is scheduled for completion in 2018.

RUBEZH magazine interviewed Andrei Pimenov, Director of Public Relations Department of "ELVEES-NeoTek". The company specializes in designing and manufacturing of high-tech security systems and business monitoring using various technologies, including biometric identification. Pimenov said that face recognition technology is in high demand, and when used correctly could be quite useful. According to Pimenov, each facility is unique, therefore the set of tasks is always different: "Obviously, if we are talking about football fans, it makes sense to identify their faces during the sale of tickets, at the entrance to the stadium, and on the stands."