What Is It Made Of…

What Is It Made Of…

RUBEZH magazine studied the main segments of security equipment market - video surveillance, access control and management systems, fire alarm, warning, and evacuation control systems. We talked to a number of security equipment suppliers about the locations of main components production bases, and explored the possibilities of Russian enterprises in this regard. The general trend has been reduced to the fact that in order to adopt full import substitution policy in the Russian security market, the country lacks one critical asset - its own production of electronic components with appropriate pricing and decent level of quality. As we interviewed our sources, we also asked them to voice their opinion on the possibility of completely moving on to the domestic component base. 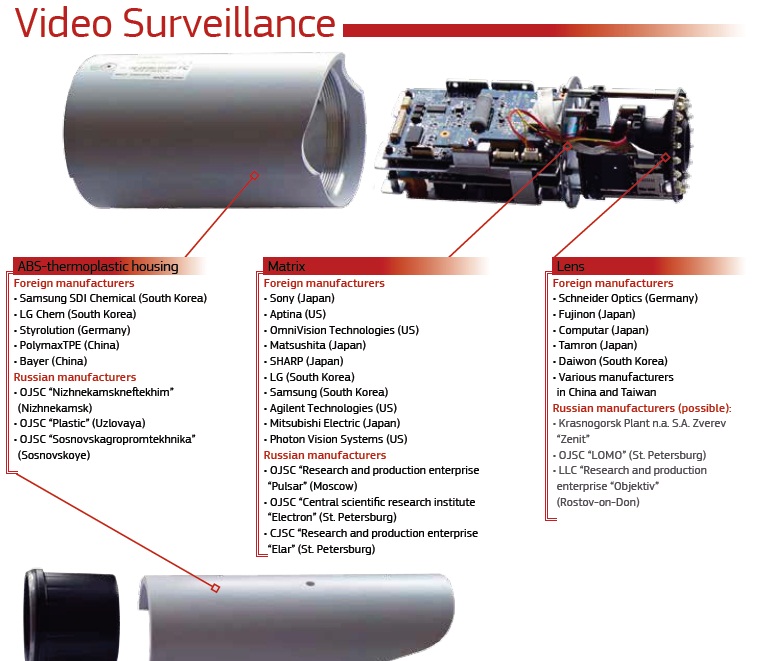 Igor Averchenko, engineering director, RVi Group
The share of imported components in the company's products is at 100%. Key components used in video surveillance equipment are manufactured abroad, mainly in Southeast Asia. The concentration of manufacturing power in the region was due to favorable factors, mainly economic. There are no Russian alternatives. I think that we should look exclusively at technical and commercial factors. Our alternatives must be equal to foreign competition in terms of technical specifications and must be more appealing to customer in terms of pricing.

Alexander Korobkov, developments director, Macroscop
99% of components used by Macroscop NVR are produced abroad (China, Japan, Malaysia, Korea, and USA). There are domestic alternatives for some imported components, but a lot is missing. For example, there are simply no processors or hard drives manufactured in Russia.

Dmitry Kolesnikov, product manager, LLC “Comcom”
We import 30-40% of components for our products. Our production department is located in Moscow. The company cannot refuse the imports since there are no Russian alternatives for digital matrices, digital signal processors (DSP) and lenses.

Robert Lazarev, director of business development in Russia and CIS, Ernitec
Most Russian companies produce housing parts and / or customize foreign finished products or OEM- modules for specific tasks. Those companies could manufacture good optics, if they wanted to.

Alexander Kulikov, TV-cameras developments laboratory director, LLC “EVS”
Take “Pulsar" enterprise, for example, the company works in the field of video surveillance equipment. They are 4-5 steps behind in nanometer technology. A few years back, for example, they were at the level of Sony’s 1987 photodevice technology.

Alexei Kadeyshvili, engineering director, CJSC “Vocord”
Today, "Vocord" company purchases the majority of hardware components for its products abroad – everything, beginning with microprocessors, matrices and lens. This is due to the fact that such production in Russia, unfortunately, does not exist yet. Of course, we would be happy to purchase domestic alternatives, but there is simply nothing available.

Igor Lyand, business director, LLC “Beward”
Today, the level of modern technology on the Russian market does not allow manufacturing the full range of necessary components while maintaining high quality level. Doubts about the reliability of most domestically manufactured components force companies to purchase a lot from abroad in order to be able to create high-quality and professional products. 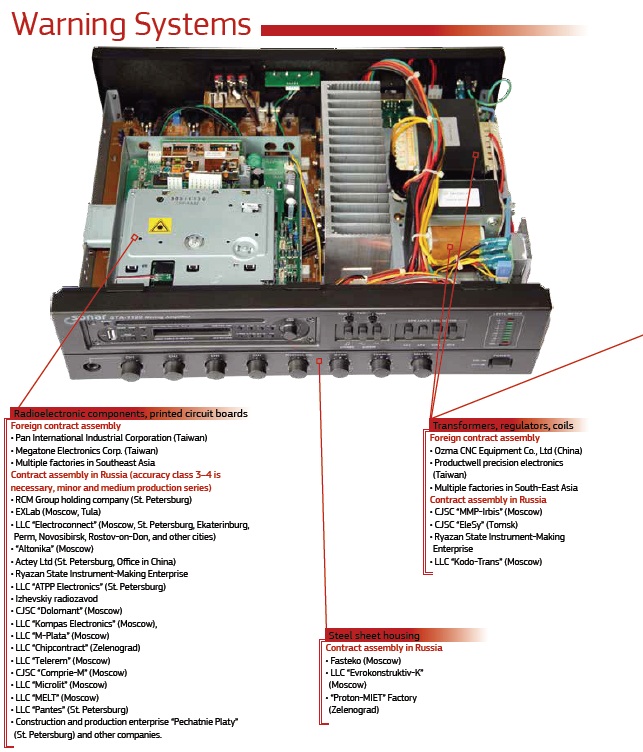 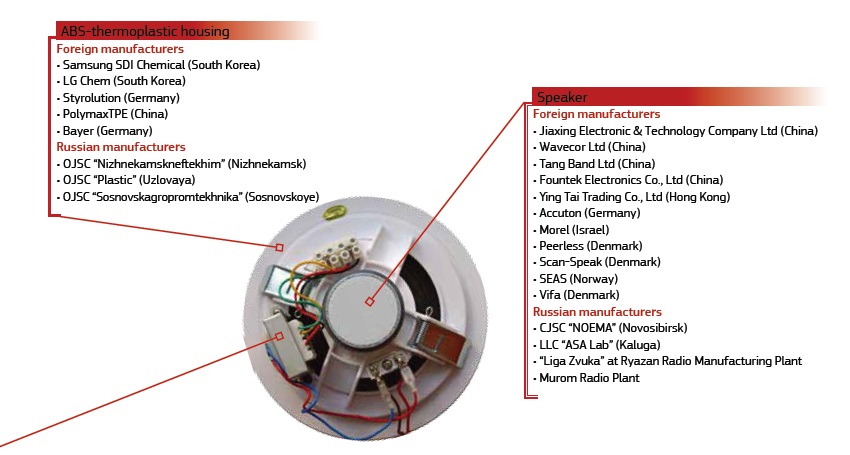 Alexander Serebrennikov, manager, CJSC “Research and Production Enterprise “Meta”
The problem of import substitution in the field of voice warning systems is mainly due to the absence of domestic electronic components. Everything else can be manufactured in Russia. Today, the majority of necessary electronics is purchased in China, and thank god, we have good relationships with the country. We often order ready-made printed circuit boards, but the companies that make them for us in Russia still import the same components. As for the speakers, we partly use those manufactured in Russia and they are as good as the ones from China. There may be some difference in the price, but it also depends on the quantity. If, say, you need a dozen thousand speakers, then it is cheaper to purchase from China, if one or two thousand, then it would be easier to find a supplier from Russia since the logistics cost less this way.

Yuri Ovsyankin, chief engineer, Murom Radio Plant
Our products use 98% of components manufactured in Russia, Ukraine, and Belarus. While developing our equipment, we also focus on the Russian component base. If we talk about the price, it is best to think of Yugoslavia. Once the conflict began, communications of the whole army went dark since everything was imported. We focus on the principle that our equipment must work in any situation. As for the speakers, some part of them we produce ourselves, and other part we purchase, but also in Russia. There is still a decent production base of speakers in Russia.

Leo Meliksetyan, chief warning systems sales manager, group contractor “Escort” (brands: Inter-M, Roxton)
Approximately 90% of the equipment by Roxton is manufactured abroad. In the coming years, the company is unlikely to abandon the imported components. Russian alternatives are almost nonexistent. At the same time, we work with Russian manufacturers of metal housing solutions and transformers.

Dmitry Repkin, deputy CEO, LLC “EVACS “Trombon”
The share of import in our products is at 90%. There is practically no production of electronic components in Russia.

Ivan Fedorov, CEO, Sonar
Warning systems is an area where little has changed in the general scheme of equipment over the past few decades. Nevertheless, the problem of a fully domestic production, as in other segments of the safety systems market, is due to the lack of domestic radio-electronic components. If we exclude microchips, then all other components can be manufactured in Russia. The problem is in the fact that it will be more expensive. Take transformers and coils, for example, I inquired about the price of inductor production in Russia. A core element alone is worth more than a ready-made product from Southeast Asia. That is, the production has not even started and it is more expensive already. 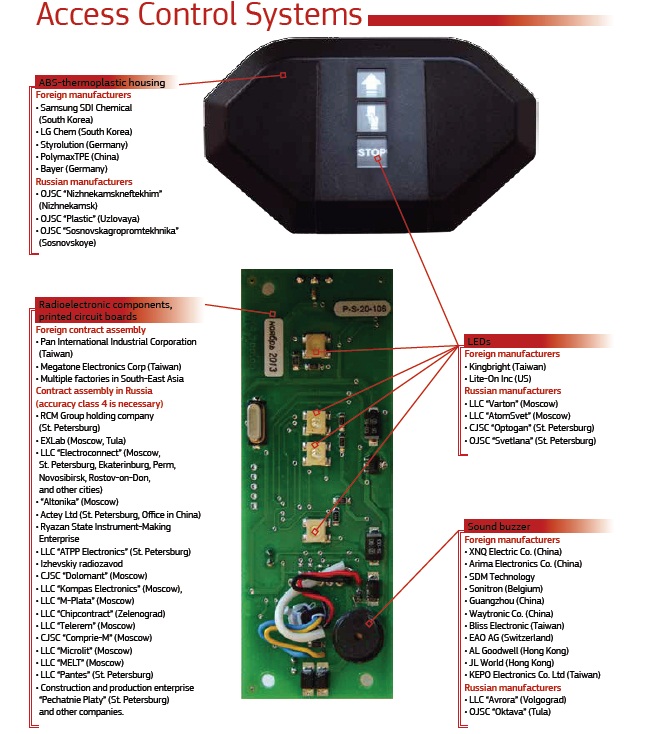 Oleg Evseev, CEO, Novgorod metalware plant "Olevs"
Approximately 10 to 20 percent of all our products use imported components (the company produces electromagnetic locks, exit buttons, video transmitters and weather-proof housings for video cameras). Some of the components simply cannot be found in Russia. In addition, in case domestic alternatives do appear, they will still be based on imported materials, Russian companies will only assemble the final product. On the one hand, import substitution policy can theoretically increase sales volumes, and on the other - I just do not believe in it. In order to replace foreign technology completely, we need to build factories first.

Olga Kuznetsova, analysis, planning and advertising department director, PERCo
We purchase components for our equipment all over the world. Currently, we primarily work with Germany, Taiwan, Japan, USA, Italy, South Korea, and China. We use less than 50% of domestic components. When a Russian alternative appears on the market, we try to purchase it. But the problem is that the Russian market produces very little, a tiny fraction of components, and the price is so much higher than the import that it is cheaper to order from abroad, and even spend money for transportation and customs control.

Sergei Yelshin, deputy CEO, research and production company “Vitek”
We can manufacture products based on both domestic and imported components (the company produces electromechanical locks and code entry pads). I do not see any obstacles to use only Russian components. All production complexes, which were active in the electronics industry in the USSR such as "Integral" and others, can produce electronics. At the same time, I think that the policy of import substitution will result in a decrease of product quality.

Alexandra Karasyuk, PR manager, Iron Logic
We are 99% dependent on imported electronic components (resistors, capacitors, and microchips). There are some Russian alternatives that might suit us, but we are not satisfied with the price and quality.

Sergei Salyuk, manager, LLC “RostEvroStroy” (brand “Rostov-Don”)
We use only domestic components in our products. In our ticket-gates we install controllers made by the Russian company “Sphinx”. With regard to import substitution policy, of course, I would want to see Russian companies producing more. In our segment, there are mainly domestic manufacturers - PERCo and OMA, and others set far greater prices.

Alexander Ryzhov, engineering director, LLC “PromAvtomatika” (brand “Sphinx”)
Our products use a very substantial share of imported components. We use components manufactured by American, European, and Asian companies, but it is mostly American technology that interests us. It is impossible to substitute imported components with domestic alternatives for us. Not only our company, but many others will not be able to exist if the flow of electronic components gets blocked somehow.

Dmitry Baklanov, CEO, engineering and technical center “Promix” (brand “Sheriff”)
The share of imported electronic components for our products is at 100%. There are no companies in Russia producing components that we need. I do not think that full import substitution of electronics is possible for us, because everything comes from China and it is difficult to compete with Asia. Unfortunately, the Russian taxation scheme does not allow us to produce anything for the same amount of money as they do in Asian countries. 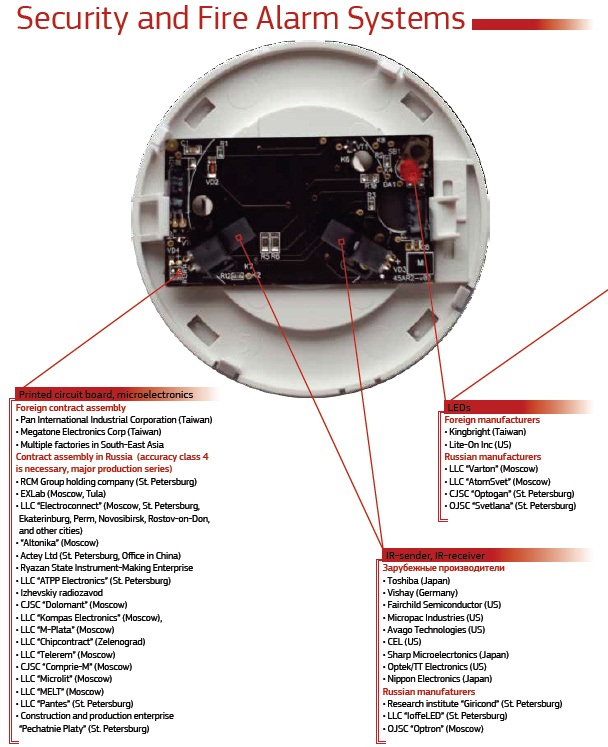 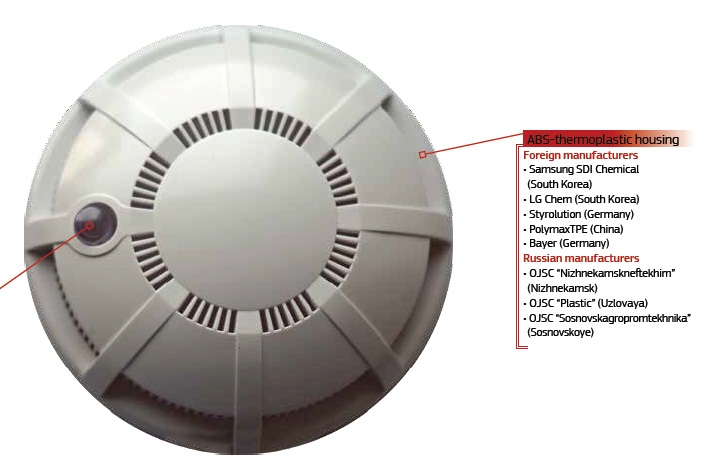 Mikhail Levchuk, deputy CEO, CJSC “Argus Security”
Unfortunately, Russia does not have its own production of radio- and microcomponents, so we remain dependent on imports in this part. Our executives has repeatedly studied the possibility of cooperation with science cities on the production of microcomponents in our country, but there are still no alternatives that could replace imported microchips.

Anton Pinzhakov, operations director, research and manufacturing association “Spectron”
Today, the share of foreign-made components in our products is approximately at 60%.

Nikolai Taktashov, deputy CEO, CJSC “Eridan”
The share of imported components in our products is at 100%. Our supplier is China. There is hardly any possibility to substitute currently used components to domestic alternatives in the nearest future.

Sergei Levin, chief structural engineer, LLC “Sigma-IS”
If we talk about electronic components, then the share of imported components in our products is at approximately 70-80%, which is 50-60% of all total product line. Is import substitution possible? Yes, if there is a corresponding component base. If we talk specifically about the market of security and fire alarm systems, then it is generally easier to implement this policy because the product is not as technologically sophisticated. I think that it could be quickly implemented.

Dmitry Taranenko, business director, LLC “Altonika”
Looking at our component base, I’d say that the import level is at approximately 35–40%. Unfortunately, we cannot abandon it, since the majority of microchips are quite specific and there are no domestic alternatives.

Alexander Alexeev, engineering director, LLC “Specpribor”
Different products have different amount of imported components. On average, it is 50-70%. Since we produce automatic equipment, we are talking about mostly electronic components. If Russian alternatives appear, then, of course, we will be able to abandon the imports. We did not find suitable alternatives yet. Electronics is the most problematic area in this regard, everything else can be manufactured in Russia as of today. We know there is production of microcontrollers in Zelenograd, but, again, all this will have to be adapted for our products, and we don’t know whether those components will have the same functions.