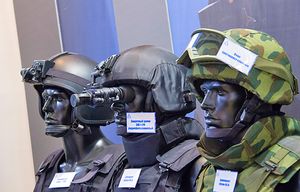 XVIII international security equipment exhibition "Interpolitex 2014" is being held in Moscow on October 21 to 24.

Vladimir Moshkov, head of the "Center of Engineering and Technology Development" of FSBI Scientific Research Institute of Civil Defense, provided extensive commentary on the exhibition to RUBEZH magazine:

Individual exhibits attracted the ministers’ attention: exoskeleton - a mechanical device without drive units (electric, hydraulic), designed to facilitate cargo carrying. The framework takes some of the load, without reducing the mobility of the arms, back and legs. Thus, the user does not feel the 50 kg weight at all. During the exhibition, it was decided to send a few sets of exoskeleton on trial operation to rescuers who work in the mountains and often have to make long marches.

Unmanned aircraft complex "Granad VA - 1000" equipped with a system of radiation control and featuring lightweight carbon fiber framework has also interested the ministers. The complex carries video cameras and can be used for exploration and monitoring of emergency zones, while searching for radiation sources.

Video transmission system based on this technology placed on a trained dog can be used for search and rescue tasks in conditions hazardous to humans. Moreover, the operator can control the dog by giving commands over radio channel. According to Vladimir Moshkov, such communication systems are extremely expensive at the moment and their use is economically justified only in specialized units engaged in highly dangerous operations. During the exhibition, it was decided to carry out prototype testing of the equipment in specialized units of the Ministry of Emergency Situations performing operations in areas of particular risk: irradiated zones and in the mines.

Aircraft use has recently become one of the main directions in improving efficiency of rescue services engaged in the elimination of fires and other emergencies. The use of airplanes and helicopters reduces the response time of emergency services, which, in turn, entails an increase in the efficiency of rescue operations and the possibility of implementation of air-rescue technology. Special equipment installed on aircraft enhances the functional range of aviation. "Multi-channel electro-optical sighting system" for transport aircraft with 360 degrees viewing angle and the ability to work in extreme conditions can stand as one of the examples of such equipment. The system is designed for installation on IL-76 aircraft and can be used for object search tasks in the visible and thermal range on heights up to 15 km. The system sends coordinates of an object to the navigation system of the aircraft. The ministers decided to conduct prototype testing of the system by installing it on IL-76 belonging to the Ministry of Emergency Situations. The developers were also instructed to adapt the system for use on Mi-8 helicopters.

Vladimir Puchkov expressed great interest in the mobile robotic system "VYSTREL" designed to perform explosion works. Unlike analogues, the robot initially freezes the potentially dangerous object to minus 180-200 degrees - a 12-liter cryogenic container is used. After the freezing, all kinds of detonating fuses cease to function and the robotic complex shoots the object with water cannons.

Viability of an android-type robot with the master-slave system was also acknowledged. Operator puts on a costume that fully conveys motion to the robot: fingers, hands and head, while preserving natural human body mobility. The robot transfers feedback to the operator – on long distances the operator can feel objects held by the robot. As of today, the complex can even be used for welding works. The project, however, is not finished and will be completed in 2015. The technology will become the base for the creation of an android rescuer, which will carry characteristics necessary for the ministry.

Both the Ministry of Emergency Situations and the Ministry of Internal Affairs found helpful the subsistence complex for specialized units based on KamAZ cargo trailer. The complex deploys pneumo-frame campground for up to 200 people. Such "town" has everything necessary for comfortable living of rescuers in any climatic conditions. Deployment of a single tent takes up to 4 minutes. During the exhibition, it was decided to develop a similar complex for 500 people.

In his comment on the training battle, demonstrated by the internal military special forces at the site of "Geodezia" research institute in Krasnoarmeysk, Vladimir Moshkov said that with every year the demonstration performance becomes more dynamic, troops utilize new technologies, new tactics and state of the art technical equipment.