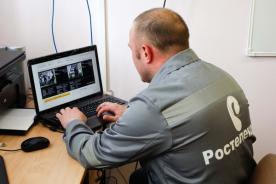 More than 36,000 classrooms across the country were equipped with cameras. Approximately 16,000 cameras broadcasted online. The system was able to provide video broadcasting for 1.2 million simultaneous viewers via the internet and allowed for 60,000 simultaneous views from one camera.

As a reminder, we would like to point out that according to the government order, "Rostelecom" was the only company chosen for providing data networking services including video broadcasting via the Internet and collection and storage of recorded video during the Unified State Exam of 2014.