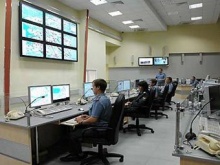 The system implemented in the Kirov region is drawn into a single unit where components represent a set of different solutions: traffic rules violations detectors, surveillance cameras installed before the "Citizen-Police" emergency communication stations and centers of data storage and processing.

According to Mikhail Babich, the experience of the system’s implementation and operation will help to modernize the "Safe City" project throughout the region and beyond. A unified public security system will be created for the World Cup 2018. The task of studying the most successful examples of compound security systems implementation in regions is part of the preparatory phase prior to its creation. The Kirov Region passed the “exam” successfully.

A model of the nation-wide "Safe City" system will be developed under the supervision of the Military-Industrial Commission under the Government of the Russian Federation. The commission is headed by Deputy Prime Minister Dmitry Rogozin. It is expected that scientific and technical justification for a nationwide hardware/software complex will be presented in the nearest future.