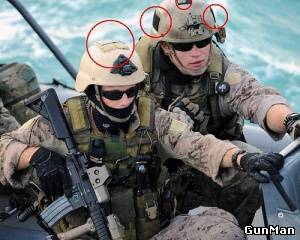 The project for creation of scientific and industrial cluster in Kazan under the authority of "Radio-Electronic Technologies" enterprise (state corporation "Rostech" affiliated concern) has been complemented with identification systems for the Russian armed forces personnel.

The project approved by Deputy Prime Minister Dmitry Rogozin, is aimed to combine six enterprises. The equipment itself will be manufactured within the walls of two enterprises in Kazan, while other companies will take part in design process.

According to Andrew Tyulin, "Radio-Electronic Technologies" Deputy CEO, quoted by the newspaper "Izvestia", the system designed for troops will come as a sensor fixed on clothes. A soldier will be able to distinguish friendly military forces from those of an enemy with the help of a special device, similar to mobile phones.

In order to organize collaboration and re-equipment of six companies, the concern is going to spend 10.6 billion rubles by 2017. The expected revenue by 2020 is estimated to be 18 billion rubles. The cluster will include scientific and manufacturing association "Radioelectronics" n.a. V.I. Shimko , "Radiopribor" plant in Kazan, Kaluga Radio Engineering Research Institute, "Ekran" factory in Samara, "Zhigulyovsk Radio Plant" and Instrument-Making Manufacturing Association in Ufa.

Earlier, at the "Integrated Security 2014" expo, a St. Petersburg company "Argus-Spectrum" presented their "Strelets-Warden" system. The system is based on the so-called "electronic body armor suit" – a radio channel bracelet worn by soldiers able to alert the user of the danger, gather information on hostile attacks on the user (immobility sensor), on abduction (motion control sensor) an on hostile invasion maneuvers.

Deputy head of marketing and sales department of "Argus-Spectrum" Ksenia Zakharova in her interview to RUBEZH expressed the belief that implementation of a similar "friend or foe" identification system is a topical issue.

"As we were developing our system, we did not set the task of soldier identification. The system was developed to provide functions needed daily in the army service, as well as to organize groups of soldiers during pre-combat stages of military encounters. Nevertheless, "Strelets-Warden" system does perform the identification function indirectly: officers can see their troops positioning on screen. In addition, the radio channel bracelets are equipped with sensors of removal. If an "enemy" tries to capture the bracelet in order to intercept headquarters commands, the officer on duty shall know about the breach in mere seconds"- says the expert.