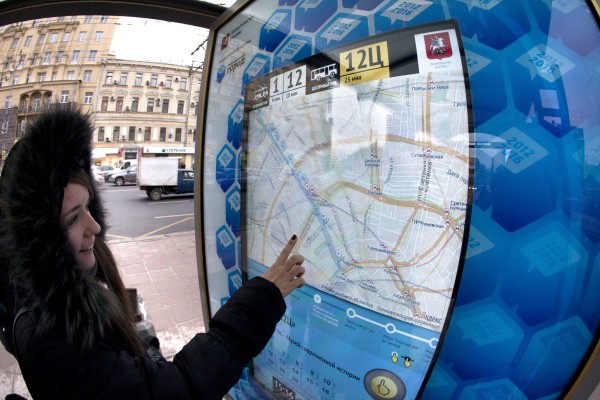 Moscow authorities expressed the idea of creating a new generation of bus stops before. In 2013, a new bus stop was installed on Tverskaya Street, where passengers could watch the movement of public transport and see the precise time of arrival. However, the project was short-lived: soon after the installation, interactive screens were covered with advertising posters, and later were removed altogether. Back then, Moscow authorities explained the situation: the screens were displaying faulty information and had to be reconfigured. However, the screens were never put back again.

At the end of October this year, state unitary enterprise "Mosgortrans" is planning to present a prototype of safe bus stops that will eventually appear on the streets of the capital. The bus stops will be equipped not only with interactive screens, like their predecessors, but also with surveillance cameras and panic buttons.

Vandalism-protected interactive screens will display public transport routes. Cameras will be concealed within the screen panels. Interactive functions will allow citizens to call for police and ambulance in case of emergency. Anton Tsvetkov, Deputy chairman of the Public Council under the Main Directorate of the Interior Ministry, believes that cameras should have face and license plate recognition functions. At the same time, according to Tsvetkov, public transport can be used for missing persons search tasks, as well as for crime detection tasks. Video feed from cameras must be transferred to police in real-time.

The exact time when Muscovites will be able to get acquainted with the innovation has not been named yet - the funding source for the installation was not determined completely.  It is possible that the money will be allocated from the “Safe City” budget.

A prototype of the new bus stop for exhibition presentation was developed by the company from Nizhny Novgorod "Trance-Detail". According to CEO Andrei Myagkov, cameras will have rather high resolution - 8 and 16 megapixels. Video records archive is planned to be stored for 7 days, the archive will help to investigate thefts and traffic accidents, it will also be possible to add functions of face and vehicle recognition.

Interactive panel will provide information on public transport. In addition to text information (arrival times, movement of trams, electrobuses and buses), citizens will be able to use interactive maps and report problems directly to dispatcher services.

The cost of this marvel of engineering is estimated to be more than 1 million rubles. Currently, 440 regular bus stops were equipped with special information boards, displaying transport arrival times.

Alexey Sizov, director of engineering of "Satro-Paladin", told RUBEZH magazine that the establishment of such bus stops is a very serious topic. This is a really useful idea, since it relates to the development of the existing “Safe City” system, but the current implementation has some flaws. "I am still greatly surprised by the idea of implementing missing persons search functions, because I believe that the currently existing communications channels are unable to transfer the amount of information needed for such tasks. Therefore, such tasks should be performed “on the spot”. It turns out that servers installed together with cameras within new bus stops must process this data. But I find it hard to imagine a server that can store the entire federal database of missing or wanted persons." According to Sizov, the idea is definitely interesting, but it still too complicated to be fully implemented. In this regard, my concern is that the budget funds that could be spent on something more useful will be wasted for the sake of functions that can hardly be implemented at the moment.