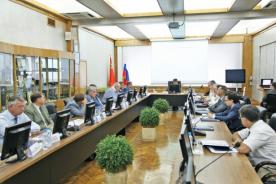 A meeting of the Presidential Council General Committee for economic modernization and innovative development of Russia was held at the Ural Optical and Mechanical Plant (part of Rostec State Corporation "Shvabe" holding).

The subject of discussion was the development prospects of photonics in Russia – a line of industry that includes certain fields of science and technology, which specialize in the processes of photon flux energy and information transition. In Europe, photonics is recognized as one of the six key productive technologies, and in the U.S., it is considered a technology of paramount importance. Photonics includes laser, optical and optical-electronic technologies.

According to the officials, the main vector of photonics development should include transfer to the civilian sector, mass production and promotion of domestic equipment procurement.

Denis Manturov, Minister of Industry and Trade proposed adding photonics to the number of prioritized courses of science and technology development. According to Manturov, Russia currently manufactures 1,700 models of different equipment in this area, but the production currently runs in small-scale. Manturov also noted that domestic products of the discussed technology match world standards and even exceed some import variants in quality in a number of segments.