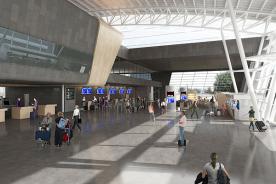 Kazan International Airport will see a number of upgrades to its security systems and will be re-fitted with new equipment by 2018 when Russia will host the World Cup, said Mikhail Kondratyev, the first assistant director of the airport, during the committee meeting on aviation security conducted by Association of Civil Aviation.

According to Kondratyev, today the airport meets all safety requirements. The facility utilizes multilevel visual and technological control of passengers and baggage. After reconstruction, all terminals and Inspection units were fully re-fitted with the necessary equipment.

Mikhail Kondratyev drew attention to radio wave scanners, which are used in the airport – the scanners helped to decrease the time of screening of passengers, flight crews and airport employees, the technology also helped to increase efficiency of the procedure. Radio wave scanners are able to detect explosives, ammunition, firearms, drugs and other dangerous objects.

The 13,5-kilometer perimeter fence around the airport provides additional protection, the fence is equipped with systems of video surveillance (including thermal cameras), intrusion alert and safety barriers.

Information from all systems (almost 600 CCTV cameras) is automatically transmitted to security office. Before reconstruction the airport was observed with only 50 cameras.

During the meeting, committee members discussed matters concerning improvements of the legislation in the area of aviation security. Vladimir Chertok, deputy head of Rostransnadzor (Federal Transportation Inspection Service), reported that 543 terrorist threats were registered in Russia in 2013, along with 60 acts of unlawful interference resulting in the deaths of 37 people and 95 cases of serious injuries. As a result, more than three thousand legal entities were prosecuted, 3200 regulations on transport security were issued and more than 20 million of punitive sanctions were imposed.

Over 80 representatives of the industry attended the meeting including leaders of the 30 largest airports in Russia, aviation equipment manufacturers, representatives of Rostransnadzor (Federal Transportation Inspection Service) and Rosaviatsiya (Federal Air Transport Agency).