Government Officials Were Recommended to Abstain From Using Products by Apple, Yandex, Google and Mail.ru

Government Officials Were Recommended to Abstain From Using Products by Apple, Yandex, Google and Mail.ru 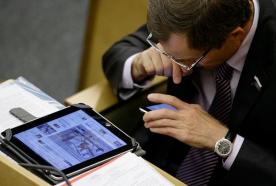 In the nearest future, the government intends to resume consideration of laws aimed at strengthening the country's information security.

It is planned to raise the issue of proprietary software development and the proposition on abandoning the use of products by Apple among public servants.

The decision to move from iPad internet tablets to Korean Samsung devices was made in March 2014. However, not all government officials parted with their Apple devices.

It is proposed to replace the foreign-manufactured devices with the latest Russian developments such as smartphones developed by “Rostec”, the creation of which has been allocated about 1.5 billion rubles, and Yotaphone, a smartphone developed in Russia.

In addition, Moscow mayor issued a decree, in which he recalled the ban on the use of personal electronic mail for business purposes. Employees of Moscow mayor's office, prefectures, and subordinate organizations can use only the @mos.ru postal service. The use of services by Yandex, Google, Mail.ru, or any other email providers is forbidden.

State Duma Deputy Vladimir Gutenev presented another draft law in which the parliamentarian proposes to prohibit registration of aircraft under foreign jurisdiction in order to save Russian passengers from possible sanctions.