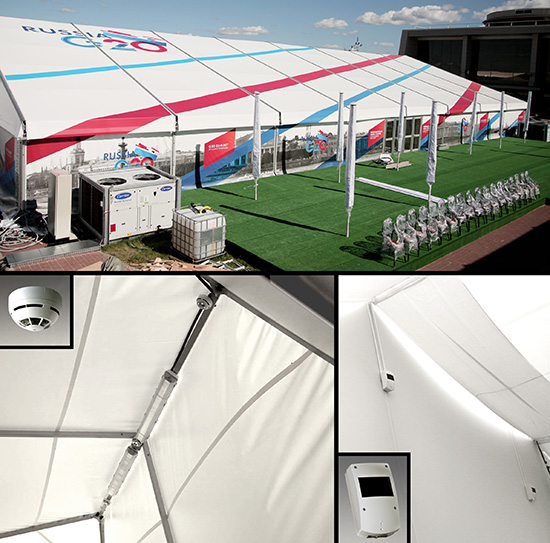 Fire safety for the participants of the G20 Summit, which is held in St. Petersburg in September, is provided by a wireless system called "Sagittarius”, produced by "Argus- spectrum" company. Special tents were put up on the territory of the State "Palace of Congresses ". Meeting of the heads of states, including the meeting of the presidents of Russia and the United States will be taking place there. The territory of over 22 square meters is equipped with more than 600 fire radio channel detectors, which belong to "Sagittarius" system.

The choice of this system is conditioned by several factors: "Sagittarius" meets the standards of Russian and European legislation in the field of fire safety, it can be easily installed, it has protection from interference due to automatically changing frequency, power and signaling rate control.

In addition, it is the first time when an innovative system for evacuation - "Ariadne's Thread" is used. This system not only finds the source of the fire and informs people on the premises through the speakers, but also makes it possible to organize safe evacuation with the help of light strip and sound waves, leading people to the safest exit. Let us remind you that "Sagittarius" functions in the residence of the Queen in Scotland, ships of the UK Navy, "Vostok" station in Antarctica, and in the building of the Mariinsky Theatre.