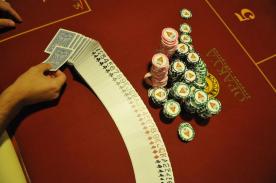 The State Duma is to review a draft law regarding establishment of a gambling zone in Crimea in the first reading. The Crimea authorities supported the idea of establishing a gambling zone in the republic. Ministry of Regional Development of Russia suggested opening the casinos in five star hotels in Crimea and Sevastopol. Presently there are four gambling zones in Russia: “Azov-City” (Azov and Black Sea coastal region of the Caucuses), “Primorye” (in the vicinity of Vladivostok), “Sibirskaya moneta” (Altay), and “Yantarnaya” (near Kaliningrad).

The draft law grants the regional authorities with the right to determine the location and boarders of the gambling zone in the republic. According to Mr Igor Rudensky, head of the committee on economic policy and entrepreneurship, casinos can secure additional investments and create new workplaces. Apart from that, Crimea can expect the increase in the number of visitors and development of the hotel infrastructure in the region.

The question regarding opening of the gabling zone on the territory of Sochi’s mountain cluster was raised before the Sochi Olympics. The initiative was supported by the Russian authorities. Some media sources stated that the social council of the city of Sochi addressed the president and stepped forward with the proposal to renew discussions of the project. However, on June 9, Mr Dmitry Peskov, spokesmen for the president, informed the media, that the Kremlin did not receive any project proposal regarding establishment of gambling zone in the Olympic Sochi.