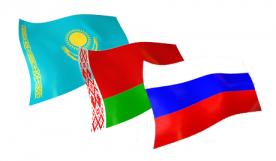 The Customs Union member states – Russia, Kazakhstan, and Belarus – prepared a draft of the project of technical regulations for fire safety. The draft now has to be finalized by the Eurasian Economic Commission. According to Mr Grigory Voropaev, deputy-head of the Department for Supervision of the EMERCOM, during the summer technical regulations are going to be discussed by the general public on the Eurasian Economic Commission’s website.

The document describes security tools, methods of respiratory organs’ protection, and the process of fire fighting. According to the authors of the draft, a unified set of regulations for all member states will present the producers with an opportunity to sell their products on the territory of the union without certification. For example, according to the document, all fire extinguishers have to meet a unified standard. In the nearest future Armenia and Kyrgyzstan can start observing similar technical regulations.

May 29 (Astana), presidents of the three countries signed an Agreement about the Eurasian Economic Union. Within the framework of the Agreement its participants can freely transfer goods, services, capitals and workforce within the Union territory.

According to Mr Sergey Rusakov, manager of the marketing department of the non-governmental organization “Siberian Arsenal”, unified regulations for fire safety can help to facilitate work of the companies involved in this professional sphere. In his expert opinion, numerous bureaucratic barriers can be overcome; unified regulations can help fight corruption. Even now the unified certificate of compliance of the Customs Union significantly simplifies the turnover of goods between its member states.