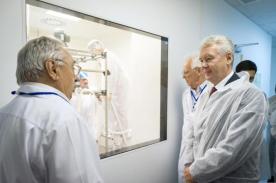 Center for the development of domestic production operations needed for import substitution will be created in Moscow, as announced by Moscow Mayor Sergei Sobyanin during his visit to the industrial park "Strogino".

Deputy Head of the Department of Science, Industrial Policy and Enterprise Michael An added that major city and federal programs of product promotion are currently active in the capital.

Technological and industrial parks will help to develop domestic production. By 2017, it is planned to open 18 such high-tech centers in Moscow, and the construction of both new Moscow Institute of Physics and Technology building and innovation center "Skolkovo" will be completed in 2014. In addition, by the end of 2014, at least two or three companies will be granted the status of technological park.