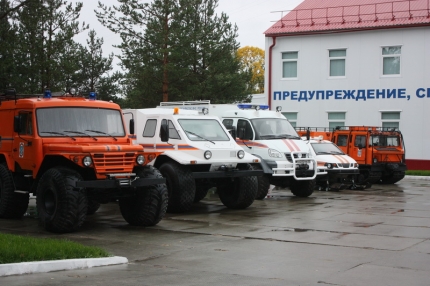 New rescue center will have 140 people of staff. The center’s territory has two-storey administrative building, a covered parking lot, sea vessels hangar, a reinforced concrete boat ramp and shoreline. Nine fire trucks and rescue vehicles will soon be transferred to the center.

Governor of the region Igor Orlov said that the new rescue center in Arkhangelsk has a number of unique features - educational, scientific and industrial bases of the center provide for very quick response times for all kinds of possible emergencies. In addition, the potential of using ship repair facilities in Severodvinsk and the White Sea Naval Base represents significant benefits.

Complex security system for the Russian Arctic Area population and territory is being created due to the risks of emergencies occurrence in the Arctic Region. This system will consist of 10 complex emergency rescue centers of the Russian Emergencies Ministry. The Northwest Arctic District already has operational emergency center in Naryan-Mar, and a similar center is being built in Murmansk.